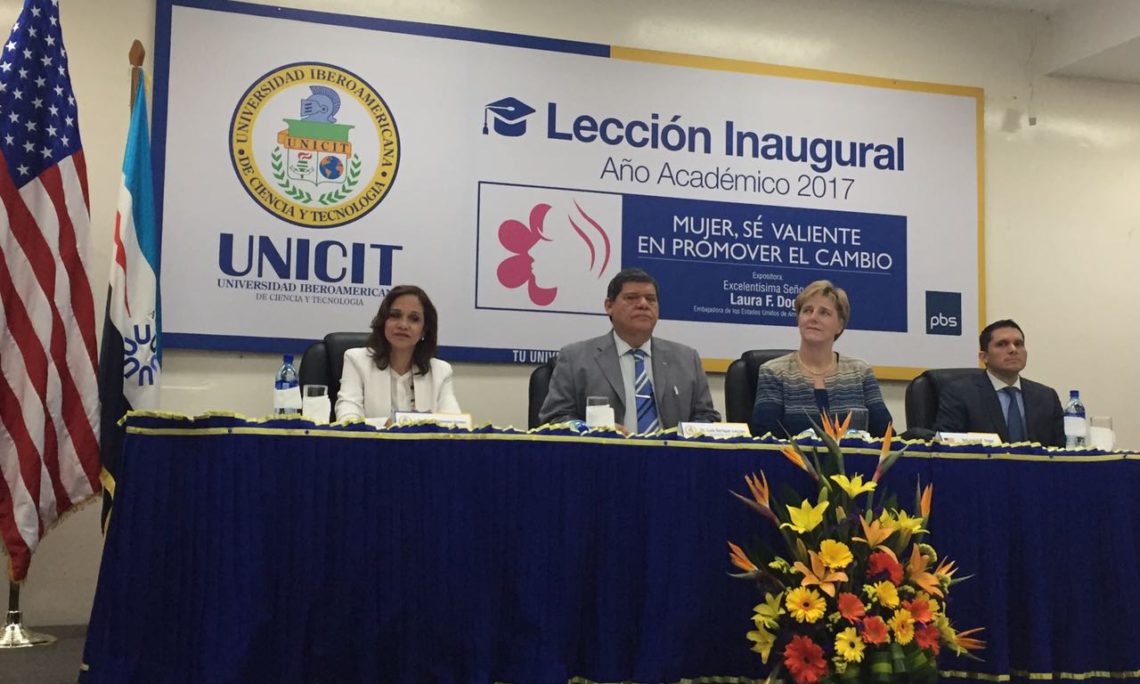 Good morning, everyone. It is an honor to be here today to deliver this inaugural lecture. Thank you, UNICIT, for the invitation.

It is really quite impressive what you’ve accomplished– to have started only in 1995 and now have 2,000 students, seventeen undergraduate courses of study, and the only on-line business administration program in the country.

Throughout March, we have been celebrating women’s history and challenging ourselves to “Be Bold for Change”, a motto for this month that in my opinion applies to everyone. Today, I’d like to underscore that message for women and men — and in fact, to broaden it.

According to the World Economic Forum the gender gap will not close entirely until the year 2186 which is 169 years from now.

As a point of reference, 169 years ago was the year 1848. The first electric light bulb would not be invented for another 30 years.

Can you imagine the changes that will occur over the next 169 years?

How many more Revolution are we going to have?

And yet, in these new industries of the future – artificial intelligence, robotics, autonomous vehicles, and the like – women are still vastly underrepresented.

A recent article in the magazine The Atlantic pointed out, that more than half of college and university students in the United States are women and the percentage of women entering many stem fields has risen. Unfortunately, the percentage of female computer- and information-science majors peaked in the U.S. in 1984 at around 37 percent. Today that figure is only 18 percent.

Without women at the keyboard, in the lab, or at the test facility is iimpossible to build a more equitable and prosperous future for all because the innovative ideas from 50 percent of the population cannot benefit the world.

Just think of the ideas and discoveries we have lost over the years by not having women adequately represented in these fields.

Everyone, no matter their gender, color, race or religion, must be represented fairly in charting these new waters.

Let’s review for a moment the advances that have been made just recently during the Fourth Industrial Revolution.

Investment in artificial intelligence increased 746 percent between 2011 and 2015, a mere five years. One year ago this month, an artificial intelligence platform beat a human for the first time in a game called Go – a game which has more possible moves than there are atoms in the universe. Go not only requires strategy but intuition which is what makes this breakthrough such a big deal.

That platform, AlphaGo, achieved what many in the artificial intelligence field thought was at best still five years away.

IBM’s Watson is a super computer that combines artificial intelligence and sophisticated analytical software that many companies are using to assist their customers online. For example, I recently contacted my bank in internet and I used their online Chat to consult them on a problem. It was IBM’sWatson who in fact answered me without human assistance. Seven months ago, Watson diagnosed a patient with a rare form of leukemia in 10 minutes.

Driverless cars have now driven coast to coast across the United States without incident.

And recently, the U.S. Embassy sponsored a group of Nicaraguan businesspeople to attend a construction trade show in Las Vegas where they saw the world’s first 3D-printed excavator. Even large construction machinery can now be built entirely from a printer!

What’s more, entire houses and buildings themselves can now be printed.

With these advances, the cost of manual labor is almost irrelevant as production becomes automated. With advances in deep learning and artificial intelligence, the cost of routine cognitive labor is declining rapidly as well.

According to a 2013 paper “The Future of Employment” by two scholars at the University of Oxford, 47 percent of jobs are likely to fall to automation – including jobs such as accounting, legal work and much medical work.

How will we help Nicaragua and your community to adapt and thrive?

You might be thinking, none of this will happen in Nicaragua anytime soon. Nicaragua is a largely agrarian country and labor is inexpensive. Today, Nicaragua has the advantage in the market; however without technology how can it compete when labor becomes irrelevant. All countries, including Nicaragua, need to join the Fourth Industrial Revolution. If Nicaragua does not join, it will miss out on future prosperity.

I would like to suggest three key principles to keep in mind in thinking about how to be bold for change.

As another example, UNICIT is working with us in hosting the first Massive Online Open Course, or MOOC, Camp where participants taking a free online course meet once a week to discuss their ideas and deepen their understanding of the coursework.

Second, information sharing. Success in this new economy comes not from hoarding but from sharing knowledge far and wide to make new connections and spark new insights. Those that facilitate communication, innovation, and information exchange are stronger and more sustainable. By expanding its broadband network in the country, Nicaragua is continuing to improve access to information and provide tools for greater innovation and collaboration.

For our part at the U.S. Embassy, we are working to connect dynamic Nicaraguans with each other and their American counterparts through our exchange programs such as Fulbright and the Young Leaders of the Americas Initiative and the more than 4,000 alumni of these and other programs in Nicaragua.

Third, sustainability. Previously, our idea of success was to be owners of a big house or a nice vehicle. And both businesses and government policies were structured to achieve these objectives. But this model is not sustainable today. Instead, we have evolved to an economy based on sharing instead of buying. Our natural resources are finite and we must take care in using them in a responsible and sustainable manner. Examples of a sharing economy include AirBnB where homeowners rent out rooms or apartments to travelers, or Uber, where anyone can use their own vehicle to drive passengers to their destinations for a fee.

To facilitate this transition towards a collaborative, we need a new framework, new “rules of the game.” Further, these rules must be developed transparently, administered fairly, and enforced equitably.

These are of course just a few thoughts that I hope can be of service to you all here at UNICIT as you think through not only the challenges but also the opportunities that are on the horizon.

So, to end, both this speech and this Women’s History month, I’d like to challenge you once again, from this day onward, to Be Bold for Change.