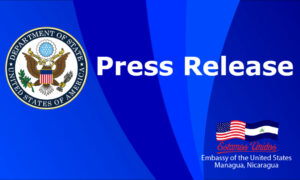 U.S. DEPARTMENT OF STATE
Office of the Spokesperson

The recent release of more than 100 Nicaraguan citizens who were imprisoned for exercising their fundamental freedoms means that these Nicaraguans, who have sacrificed greatly in the struggle for genuine democracy in Nicaragua, will be reunited with their families and loved ones.

However, dozens remain in prison, and the Nicaraguan government has placed legal conditions on those released.  We repeat our call for the unconditional release of all who have been arbitrarily detained in Nicaragua.  The United States categorically rejects a so-called “blanket amnesty” that would conditionally absolve those involved in human rights abuses and violations even while still prohibiting the exercise of basic human rights by the Nicaraguan people.  Despite the recent actions of the Nicaraguan government and legislature, the United States and the international community will continue to hold accountable those responsible for extrajudicial killings, human rights abuses, and repression.

We stand by the Nicaraguan people in their calls for a restoration of democracy through early, free, and fair elections.  Rather than amnesty for human rights abusers, we demand a full accounting of crimes by Nicaraguan forces, including their role in the May 16 prison death of dual U.S.-Nicaraguan citizen and political prisoner Eddy Montes.