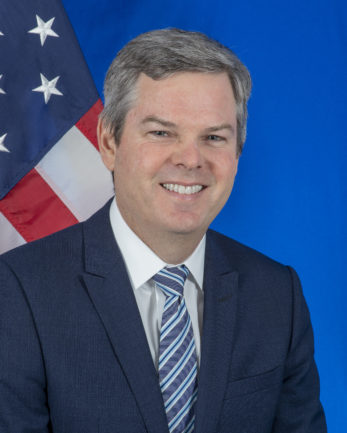 Ambassador Kevin K. Sullivan was confirmed as U.S. Ambassador to Nicaragua on October 11, 2018.  He most recently served as the Deputy Permanent Representative to the United States Mission to the Organization of American States in Washington, D.C.  Previously, he served as Deputy Chief of Mission/Chargé d’Affaires in Buenos Aires, Argentina and Deputy Chief of Mission at the United States Embassy in Lilongwe, Malawi.

Over the course of his Foreign Service career, Ambassador Sullivan served at six United States Missions overseas in both Latin America and Africa, as well as in senior leadership positions at the Department of State.  He has significant experience in economic and commercial issues, and has been a strong advocate for democracy and human rights.  Sullivan earned a B.A. at Georgetown University and an M.A. from Princeton University.  A native of Cleveland, OH, he is married to Mariangeles Quinto and has a daughter, Sophia and a son, Santiago.