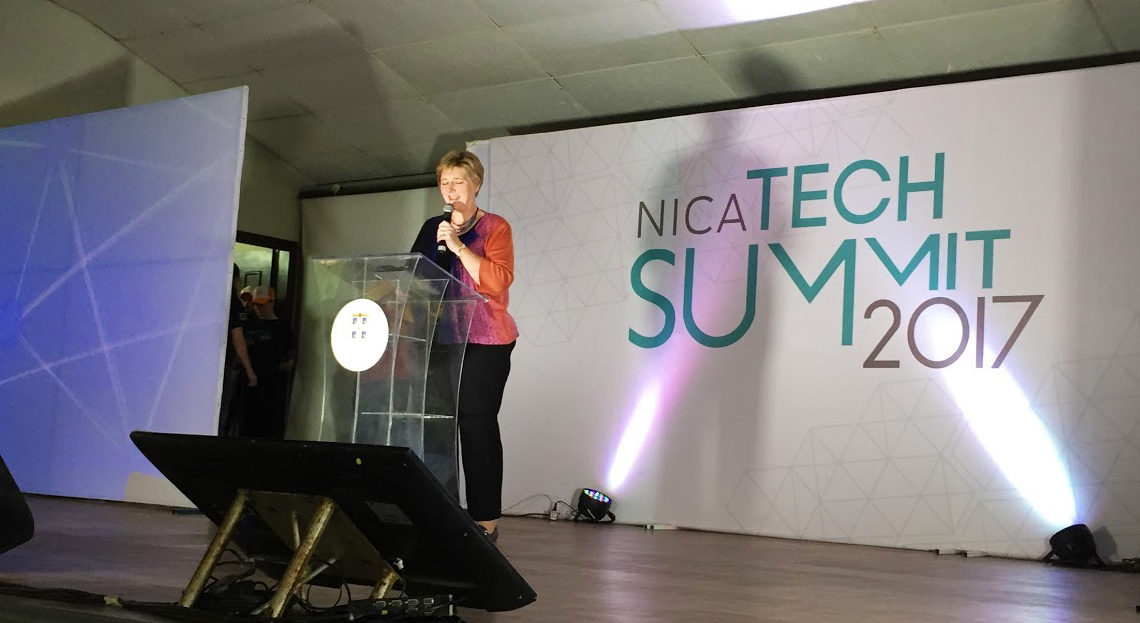 Welcome all to the Nicaragua Technology Summit 2017. This summit is an exciting and unique platform and addresses a crucial topic. To advance, we all must embrace technology. I look forward to hearing from a distinguished lineup of speakers and panelists, both from the United States, Nicaragua, and beyond, about the infinite potential of technology.

Additionally, I hope that you—those interested in technology and the future of their economy and of their country—can ask yourselves how to take advantage of technology to improve lives and create jobs here in Nicaragua. But I also hope that this Summit can be a conversation and that we will exchange ideas on how to support a more prosperous, secure, and democratic Nicaragua using the tools granted us by modern innovation. Use Twitter, Facebook, Whatsapp, and other platforms with the hashtags #NicasEmprenden and #NTS2017 to share your thoughts.

Too often, we think “the internet” or “technology” simply means social media and connecting with friends over messaging services. Because cell phone plans often include Whatsapp, Facebook and Snapchat free in many plans, many Nicaraguans feel that technology begins and ends with those services. While these are valuable, there is so much more. Mobile banking, e-Commerce, and education resources are already available to those interested. The sharing economy with smart homes and the internet of things is rapidly changing our lives, make us more productive, and give us opportunities for new businesses.

Now we are living in the Fourth Industrial Revolution! This revolution will require tools like smart networking, data sharing, and artificial intelligence. For example, drones or driverless-cars are starting to deliver goods which were produced by robots or 3D printers to people who have bought them via the Internet. Today in the United States, you can buy a 3D printer or a drone in Walmart, where a few short years ago these products did not even exist.

Before becoming a diplomat, I worked for IMB and this kind of technology was only a dream, something that belonged in Hollywood movies.

The question we have to ask ourselves is: how will these changes impact manufacturers, distributors, warehouses, and sellers? What will happen to old industries if we do not need garment factories because we print some or all of our clothes and shoes using 3D printers at home?

Today Nicaragua’s competitive advantage in international markets is its low cost of labor. But in markets of the Fourth Industrial Revolution, the cost of labor is almost irrelevant as production becomes automated and does not require as many employees. The critical factors become energy and a good education. Yet energy in Nicaragua is very expensive. Additionally, I have read media reports and heard from the private sector that quality education is lacking here. If the cost of labor is not a factor, how will Nicaragua compete?

The answer is clear: Nicaragua will compete with the ideas of people like you who are engaged in the field of technology. This represents a tremendous opportunity and a challenge to Nicaragua. So in the Fourth Industrial Revolution, I see three key factors for Nicaragua.

First, innovation. Innovation means change, transformation, new ideas, new ways of doing business. Innovation can use new technology or rethink old methods or products in a new way. In a way, the opportunities for innovation are greater in Nicaragua than other countries. It has less to lose and fewer traditional industries that need protection from innovation.

Second, information sharing. Success in this new economy comes not from hoarding but from sharing knowledge far and wide to make new connections. Those that facilitate communication, innovation, and information exchange are stronger and more sustainable. Regardless of the decisions that Nicaragua makes, other countries are advancing and positioning themselves for the future. For example, the use of drones is illegal in Nicaragua. As a result, all innovation related to this industry is impossible. Other countries can innovate and capture the market, leaving Nicaragua behind.

Third, sustainability instead of stability. Previously, our idea of success was to be owners of a big house or a nice vehicle. And both businesses and government policies were structured to achieve these objectives. But this model is not sustainable today. We have evolved to an economy based on sharing instead of buying. Uber shares vehicles. Airbnb shares houses.

To create a sustainable model, government should establish the “rules of the game” that help ease the transition towards a collaborative economy and give people a sense of direction in the future of the country. That is why it is so important that courts respect the rule of law, that government ministries administer regulations fairly and transparently, and that innovators and businesses are protected not by their political connections but by their indelible citizenship as Nicaraguans.

I applaud Nicaragua for expanding its broadband network in the country. It will improve access to information and provide tools for greater innovation and collaboration within the country, such as online education tools. In meeting with different groups, I have noticed that the internet can frighten many. They believe that the internet can change culture, business, and the status quo without understanding the benefits that it offers. That’s why education—and events such as this on—are so critical. They show us what exists in other countries, what is possible to achieve with new technologies and practices, and what will help Nicaragua in the long run.

I thank the representatives of Airbnb, Facebook, Google, Uber, and SMPLCT Labs for participating and representing the best spirit of innovation that America has to offer. I congratulate Global Shapers Managua, UCA, Core Systems, CooMart and other sponsors of this event. Let us take advantage of this moment to prepare ourselves better and to share our experiences and insights to construct a more prosperous, secure, and democratic Nicaragua. The future is already here – don’t let it pass by without taking advantage of its possibilities!