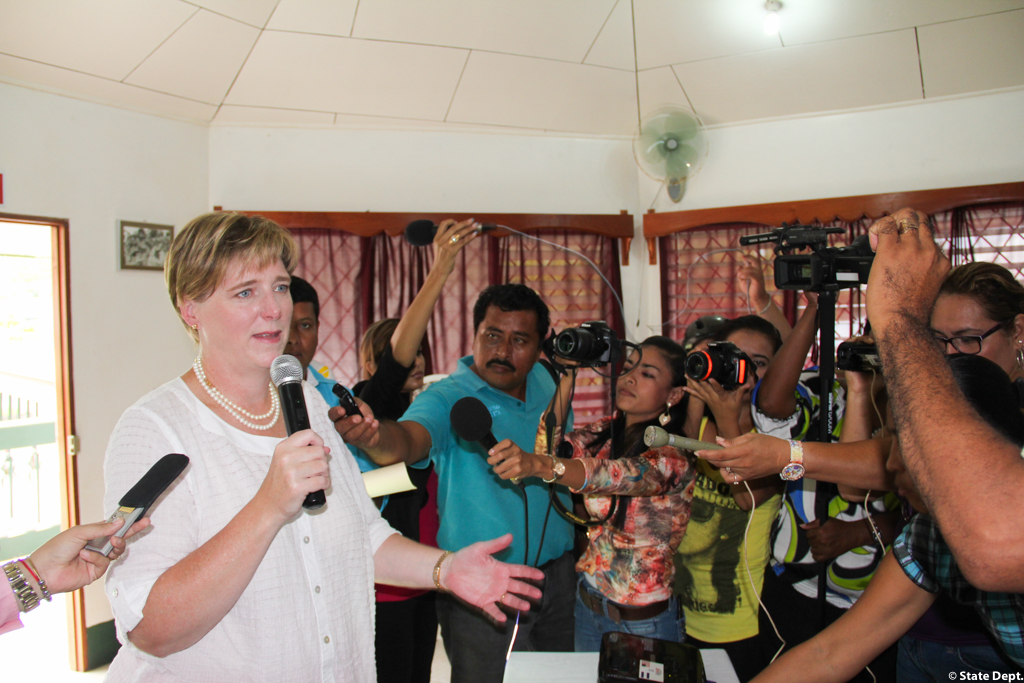 Ambassador Dogu talks to the Media

It is a pleasure to be with you in Bluefields to support the media campaign for violence prevention known as “Change Now! Just do it!”

Bluefields is unlike any other place I have visited in Nicaragua. It has its own Nicaraguan history, culture, and cuisine. I can feel the warmth of the welcome from this community. I am happy to have the opportunity to visit you during my first trip to the Caribbean Coast. The Embassy of the United States has had a long history with FADCANIC. The Office of International Narcotics and Law Enforcement Affairs of the Embassy began to collaborate with FADCANIC on projects known as “Healthy and Safe Communities” that were implemented in several communities on the Caribbean Coast.

The success of these projects led the Embassy to renew its collaboration with FADCANIC, through the current project, to further promote the prevention of violence and drug abuse in these regions. On this day, I am pleased to hear that this media campaign has reached more than 600,000 Nicaraguans on the Caribbean Coast through television, radio, and the internet.

It is impressive that more than 5,000 students also participated in the debates in the schools, while others were part radio and television programs that the campaign used. Both programs strengthened the skills of these young people, and motivated them to think of viable solutions to urgent problems.

This media campaign has brought Nicaraguan youth closer to other members of their community, especially their teachers and their parents, with whom they work together to solve community problems. It is so important to provide these spaces for youth participation and empowerment. It serves to foster positive youth participation in their homes, their schools, and their communities, regardless of the challenging conditions they face each day.

My Government recognizes the critical importance of the Caribbean Coast for the future of Nicaragua and the great potential of the people from this part of the country. For this reason, concentrated in this region are several of our development programs in Nicaragua. We are proud that this media campaign focuses on reducing violence and drug use on the Caribbean Coast. This is done by raising awareness of the harm that drugs and criminal activities can do to families and their communities. We support them, and we encourage them – as participants in this campaign – because we know that they are the main protagonists in the effort to improve the security of their communities.

The excellent work that all of you have done in this campaign prepares the way for future projects with civil society in Nicaragua. As part of our commitment to the Nicaraguan people, the United States will continue to provide assistance to citizen security and reducing drug demand. This includes our ongoing partnership with FADCANIC during 2016.

Many thanks to all for your hard work to improve the lives of Nicaraguans and provide a better future for all, especially on the Caribbean Coast.