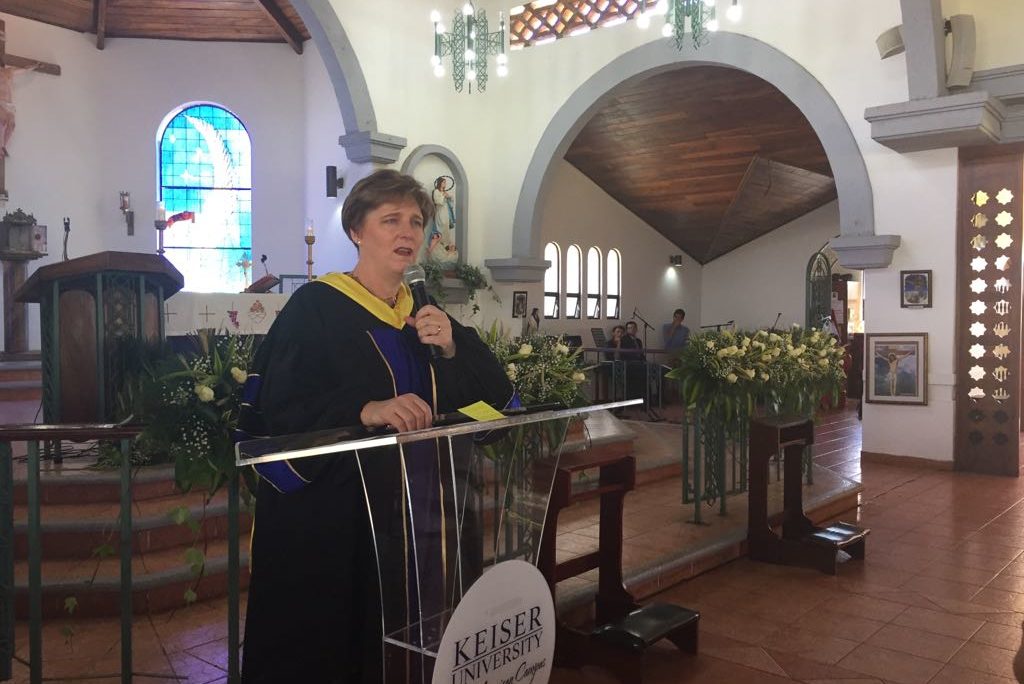 I just watched a video from Rwanda, a country in Africa with a GDP per capita that is one-third of Nicaragua’s that is using drones to deliver emergency blood supplies to remote communities, saving many lives. In another video, I watched robots sew textiles for the first time.

Remote communities with health care needs and the textile industry are part of the Nicaragua of today. But the world around you is changing rapidly and it is students like you who will lead Nicaragua into this future…

a future with the benefits and challenges of the Fourth Industrial Revolution. The future are the students who are committed to education, and that use the momentum you are building here at Keiser University to commit to life-long learning, or what some call, Infinite learning.

Now what do I mean when I say “infinite learning”? The First Industrial Revolution used water, with steam engines and turbines powering the first manufacturing machines.

But now we are seeing the dawn of the Fourth Industrial Revolution! This revolution will require tools like smart networking, data sharing, artificial intelligence.

For example, drones or driverless-cars are starting to deliver goods which were produced by robots to people who have bought them via the Internet. People are beginning to use 3D printers to print their own clothing at home.

Before becoming a diplomat, I worked for IBM and this kind of technology was only a dream, something that belonged in Hollywood movies. Yet here we are. What once we only imagined, is now a daily reality. Nicaragua’s competitive advantage in international markets has been its low cost of labor.

But in the world with the Fourth Industrial Revolution, the cost of labor becomes more irrelevant as production becomes automated. And, if the cost of labor is not a factor, Nicaragua’s best hope at being competitive will be with the ideas and brains of people like you.

Innovation means change, transformation, new ideas, new ways of doing business. Innovation is rethinking old methods or products in a new way. In a way, I see the opportunities for innovation as greater in Nicaragua than other countries.

It has less to lose and fewer traditional industries that need protection from innovation. For example, Africa is ahead of the United States in creative forms of banking because it did not have a large, existing financial industry to build upon and could simply build the best system for today.

Nicaragua is in a similar position. But in order to carve out a truly competitive role in this new reality, Nicaragua’s future lies with those who push for, and demand, an environment that facilitates innovation, and then have the capacity to innovate within it. It lies with those who demonstrate a hunger to keep learning, One of America’s greatest thinkers, Eric Hoffer, used to say: “In times of change, it is the learners that inherit the earth.” And these certainly are times of change.

Right now everything around you is changing — if you’re a business person, your business, your market, your team — are all changing. All the time.

And you can’t turn to any one expert for help — because there are no experts. Now, depending on your personality, you may find that exhilarating or terrifying.

If Nicaragua does not choose to capture emerging markets and growth industries through a culture of innovation, it will be left behind as other countries do. We have proof in front of us here today that Nicaragua has learners to carry us through this change.

You have demonstrated that you have the commitment to learning. I understand that there are 103 of you receiving honors recognition today… Congratulations.

Congratulations for the levels of focus and commitment that you have demonstrated thus far in your studies – and doing so all in English! And to those here with us today representing your families and your support network, allow me to address them in Spanish:

So I will conclude my brief remarks by simply saying: Do not let that flame of knowledge die out. Commit to continue learning. For continuing students, let’s see you all here again next semester. For those graduating soon and in the years ahead, let’s see your mark across Nicaragua’s industry and society.

Nicaragua needs you to be its infinite learners. Once again, congratulations. Felicidades.

And good luck in your continued journey as infinite learners.