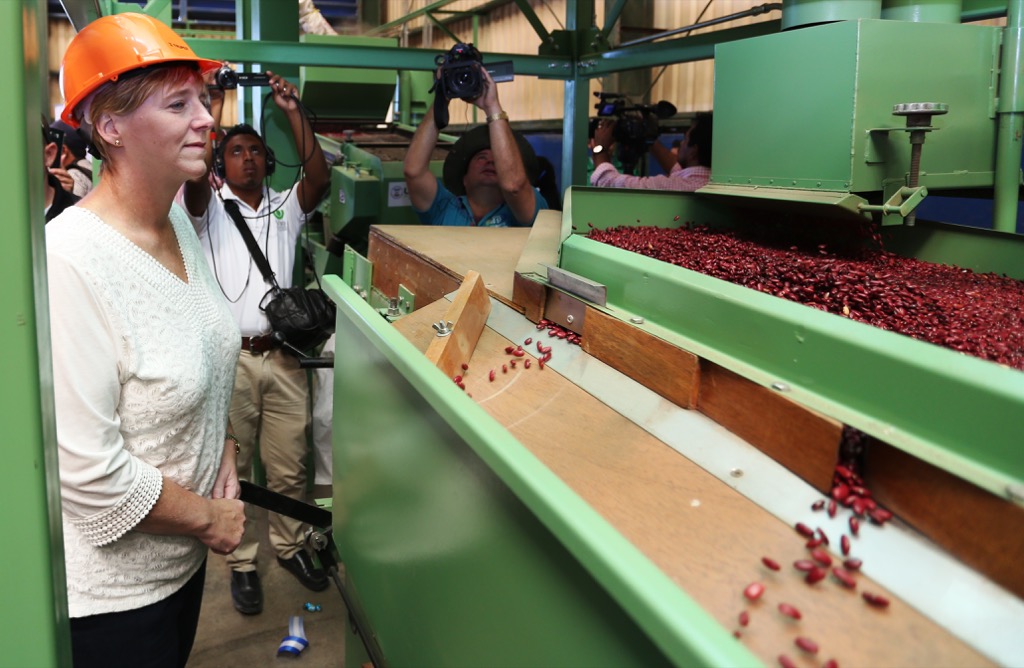 It is a real pleasure for me to be with you this morning to inaugurate this new line for processing beans that represents another huge advance for bean producers. And I’m glad to know that I can enjoy delicious gallo pinto in the United States with high quality Nicaraguan beans. I know that many of you remember when this space was a vacant lot before the bean packing plant existed and before the cooperative consortium was even founded. But in 2005, you all had the vision that, if you came together, could produce more, and even export more, to improve your lives and those of your families.

The United States government believed in you and gave you a hand. Since then, it has supported the process of legalizing the consortium and strengthening its board of directors. In turn, you increased production, through technical assistance, improved seeds, and greater access to credit.

You started using irrigation systems and I imagine you remember your first micro tunnels. And, along with this new technology, you also used better agricultural practices that protect the environment. Also, it was during this time that the countries of Central America and the Dominican Republic negotiated the Free Trade Agreement (CAFTA-DR) with the United States. There were concerns, and skeptics said that small producers like you could not compete in the world market.

Well, how wrong they were! The production truly increased, and you succeeded in exporting your products. And then, in 2009, with an investment of $650,000 by the United States Government through USAID, this agro-industrial center was built. It is important to note that, since the plant’s inception, employment opportunities have been opened for all your members, especially for women who live in this area.

Maribel Martínez Sosa, for example, tells us how the work in the plant has helped her three children greatly and two of them are already in college studying Business Administration and Marketing. Congratulations Mrs. Maribel!

We also have the example of Carmen Gregorio Pineda Gutiérrez, member and director of the consortium. From generation to generation, the family of Don Carmen has been dedicated to the production of basic grains. He tells us that with new technology, better access to water and training in marketing, accounting, and field technician, he has managed to take his product to demanding markets. Now with more income, he has improved the life of his family and sent his son to the university to study Agricultural Systems Engineering. Like them, there are many more examples of producers and workers who are improving their families’ standard of living.

You are showing the world that in Nicaragua and in the Central American region the producers, even those which have small farms, can compete in the world market, have quality products, and can meet all the requirements demanded by the United States and other markets.

And now, with this new line of bean processing, the members, thanks to the training received and their own effort, discipline and commitment, have the opportunity to receive more stable income. I am pleased to know that the improvements implemented will create new jobs, especially for women.

Likewise, the 536 members of the consortium and bean producers in the region will benefit directly from the operation of the new processing line. The improvements I have shared with you are the result of the effort made by all of you, with the valuable technical assistance of our partner, the Association of Producers and Exporters of Nicaragua (APEN). The bean value chain is one of the main value chains generated by intense regional and non-regional trade with the United States and other countries. The more than 10 thousand metric tons of first quality beans that will be processed from this donation will undoubtedly be a valuable contribution to national and international trade and an important source of resources that will guarantee food security for many Nicaraguan families.

I would like to congratulate the United States Government on behalf of this Cooperative Center, APEN, as well as all the people and institutions that have made this important achievement possible this morning. We have seen the results and growth of trade since the CAFTA-DR period, and we look forward to further expanding trade opportunities between the region and the United States as well as promoting regional economic integration. I have no doubt that Nicaragua will continue to advance and reach new markets with high quality products to create more jobs and prosperity for all Nicaraguans.
Thank you very much and many successes to all.