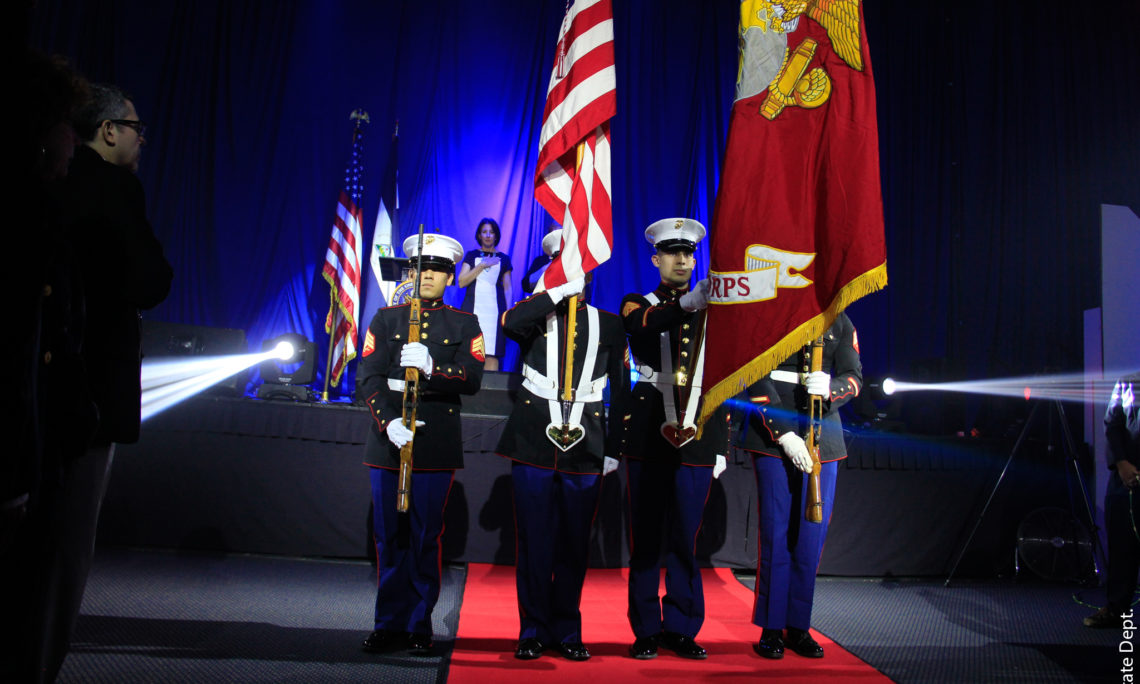 Thank you for joining us tonight to celebrate the 240th anniversary of the United States.  I want to especially thank all of our sponsors, and the Managua municipal band for welcoming us in tonight!  We generally celebrate the Fourth of July with baseball games, grilled burgers, cold beer, local fairs, community parades, fireworks, and ultimately spending time with friends and family.  As with many holidays, it is easy to get caught up in the celebration and forget what is being celebrated.  Tonight, however, I would like to take a moment to honor the holiday, to reflect on the birth of the United States.

The United States was born as a nation of ideas.  In 1776, the founders of what would become the United States declared a new nation and a series of revolutionary ideas.  Ideas that are familiar to us now, but that were new and threatening to some at the time.  The idea that each person is created equal, and is endowed with inalienable rights; The idea that everyone should be allowed to speak and worship freely; The idea that governments are empowered only by the consent of those whom they govern. These ideas and the dedication to protect them, make up the foundation of the United States.  I am proud of that foundation and the ideas upon which our nation was born and I am proud to represent a country that has equality and democracy at its core — even though we are far from a perfect democracy.

We know that democracy is a journey.  The preamble to the U.S. Constitution is clear – we are working to “form a more perfect union.”  We are on the path.  We have faced many obstacles, we will face more, and we know we will always have to strive to maintain our ideals.  Some scholars say that the first true test of democracy in the United States was the peaceful transition of power from President George Washington to John Adams in 1799, when Washington voluntarily ceded power after two terms in office.  Then, in the 1860s we faced a devastating civil war that ended in the deaths of over 1 million people.  When we rose from the rubble after the civil war, men of all color were allowed to vote, and doors started to open on civil rights.  It wasn’t until 1920, though, that women won the right to vote.  And just in the last decade we saw the first African American elected as president and of course, this year, in all likelihood we will have our first female Presidential nominee from one of the two major political parties.  Little by little we are making progress, but we still have a long way to go.  But by remembering and holding steadfast to our founding principles we are moving forward.

It gives me great pleasure to be celebrating our Independence Day with you here in Nicaragua.  This is my first Independence Day in Nicaragua and one of the things that has impressed me most are the strong ties between our people.  To celebrate these ties, we decided to change our party this year.  I hope you enjoyed the food trucks and the food.

To give you an idea of how strong our ties are, I’ll just give a quick snap shot of a few things that happened last week alone.  We sent two Nicaraguan entrepreneurs to join 700 other small business owners from around the world in Silicon Valley.  I oversaw the signing of an agreement between SINAPRED and the University of Hawaii’s Pacific Disaster Center to work together to enhance Nicaraguan capability to predict and respond to disasters and I visited a site in Masaya where we supported the Monimbo indigenous group to preserve petroglyphs, something essential to their culture and that will increase tourism and create jobs in their community. The ties between our people are very strong, whether through our love of baseball and great players like Dennis Martinez and Cheslor Cuthbert, or our deep appreciation for the written word, as demonstrated through our support of poetry in Nicaragua, particularly during this year, the 100th anniversary of the death of your great poet Ruben Dario, or our connection through music.

For the first time this year, a Nicaraguan band received a Grammy nomination, for Best Latin Rock, Urban or Alternate Album.  And now, I would like to introduce our entertainment for the night, a band that knows quite a lot about the United States!  Please join me in giving a warm welcome to La Cuneta Son Machine!